Lode Devroe (born on 01-12-1963) studied graphic design at the HIGRO in Ghent. Since 1984 he has worked as label designer for jeans. In 1996, his comic High Speed in Utah appeared in the Dutch magazine Zone 5300. The adventures of sea biologist Dr. Dia started in the magazines Beeldstorm, Incognito and Pulp deLuxe.

His breakthrough comic was Hangar 84, a story written by Pieter van Oudheusden and inspired by the Roswell incident. Years later, in 2011, it was collected in a book by Sherpa.

Lode Devroe works as a fulltime freelance illustrator since 2001. His illustrations, made in the retro “Atom style”, have appeared in Flair, Teek , Impact, Smart Business, Ché, Vacature. He has also done murals, calendars, posters, (as well as) illustrations for school books. For Ufemat, the European Associaton of National Builders, he was asked for comics (Building Bridges) and postcards (JFK in Vienna).

He recieved the award, the Stripschappenning for the comic Painted Desert #1. 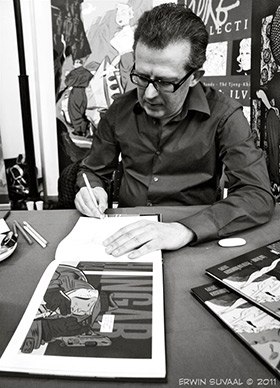