Navigation
Back to Berichten Next Previous
15 juli 2003 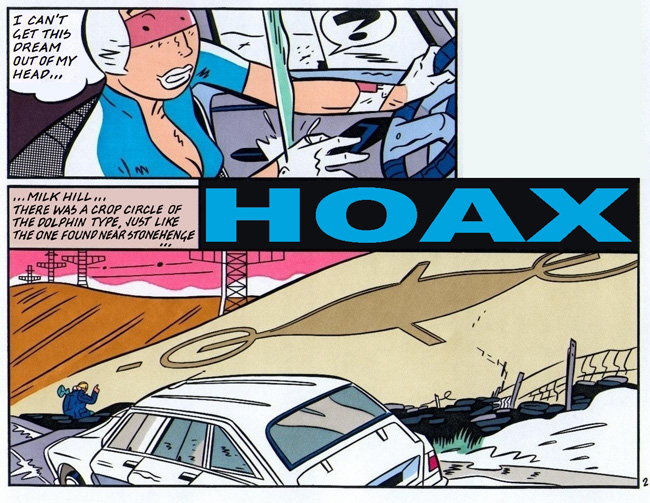 A recurring motif from David Lynch’s Blue Velvet is a ground-level shot depicting a row of multicolor mariposas, backed by a white picket fence. In the film’s startling open sequence, the camera pans down from these flowers and probes into the depths of the grassy lawn, where voraceous black beetles are discovered engaged in an epic battle. Lynch was revealing the contrast between the cheery surface of the flower bed and the vicious secrets beneath, a metaphor for the most troubling contradictions of human nature. But, quite unintentionally I’m sure, Lynch was also revealing the secret superstructure of a rival artform. It becomes obvious if you regard the row of flowers long enough. The picket fence behind them breaks the scene into a row of panels. And the flowers are cartoon stick figures with round heads. The flowers, like comics, naturally attract the eye with their bright primary colors. And like flowers, comics are delicate leafy apparitions that sway happily in the breeze, but whose roots stretch deeply into the dark wet soil.

A linking of the art of the cartoonist with the art of the florist explains much. Cartoonists ostensibly are representing human beings in their work, but their drawings typically vary radically from the contours and anatomy of a human. Round, oversized heads on skinny necks and bodies are very much the norm in comics. And the linework of comics typically imitates the graceful arcs of stems and leaves. Like the patterns of some flowers, comics characters’ faces are often bold abstract designs that barely resemble their human counterparts.

For young artists in training, after all, the flower is one of the subjects deemed especially suitable for drawing and painting. It should come as no surprise, then, that cartoon art should manifest a merging of portraiture with the most popular of still-life subjects.

My three sample comics are by artisans who display great skill, but who cannot hide the botanical roots of their work. All of them are from the excellent webcomics portal of Top Shelf, a comics company with particularly strong horticultural tendencies.

In Hoax, artist Lode Devroe rounds out the head of her heroine, Dr. Dia, with a white skullcap that looks like a retro sci-fi helmet of some kind. A pink visor stretches across her eyes, helping give her face the look of an abstract design. Her body is atypically human-proportioned, but highly stylized and simplified. The theme of the story is an environmental warning, as Dia’s investigation of a crop circle unveils a mysterious link to a dolphin who’s dying from exposure to polution. The piece resembles nothing as much as a pretty bouquet with a social-conscience greeting card attached.

Terkel Risbjerg’s MB is a subtle series of sight-gags featuring a well-meaning innocent who stumbles upon various low-key ironies. The series is distinguished by Risbjerg’s clever avoidance of dialog to explicate his themes, but for our purposes, it’s particularly notable for the hero’s pleasantly tulip-shaped head and body. MB’s shape fits him into the context of the page marvelously well, and makes him stand out from other, more rotund denizens of Risbjerg’s cartoon universe. In the first sequence of the series, MB encounters a fellow tulip-shaped wanderer, a pretty brunette who he proceeds to stalk in a park setting, only to have the tables turned on him. Their mutual attraction is a reminder that flowers are literally a sexual manifestation of nature. In Deep Sea, artist Lilli Carré seems to diverge from floral tendencies, with b&w artwork and a hesitant line quality. But her Pinochhio-like protagonist resembles nothing as much as a scruffy dandelion unbowed by the ravages of pesticides and lawnmower blades. The odd theme of the story bears this out, in fact, as the character develops a sensual obsession with the grass she’s supposed to mow.

And isn’t Pinochhio’s growing nose yet another manifestation of the human/plant crossover whose roots may indeed reach back into ancient myth?